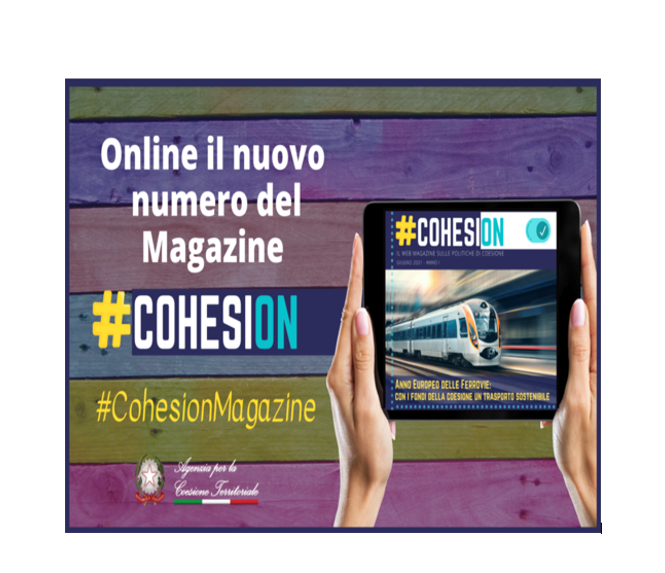 #COHESION, the web magazine on cohesion policies, writes an article on OCTOPUS, one of our most innovative products!

OCTOPUS is a system designed to check the railway health by continuously measuring the accelerations of the train while running.
The system is the result of the collaboration between IVM, the University of Naples Federico II and Texplora, and aims to develop a service to be provided to infrastructure managers, based on the processing of data obtained with monitoring systems installed on board of trains that travels on the same routes several times a day.

The June issue of #COHESION is dedicated to the European Year of Rail, established by the European Union to promote trains as a safe means of transport and raise awareness among citizens about the benefits of sustainable mobility.

Below you can read the #COHESION article on OCTOPUS in Italian with English translation: 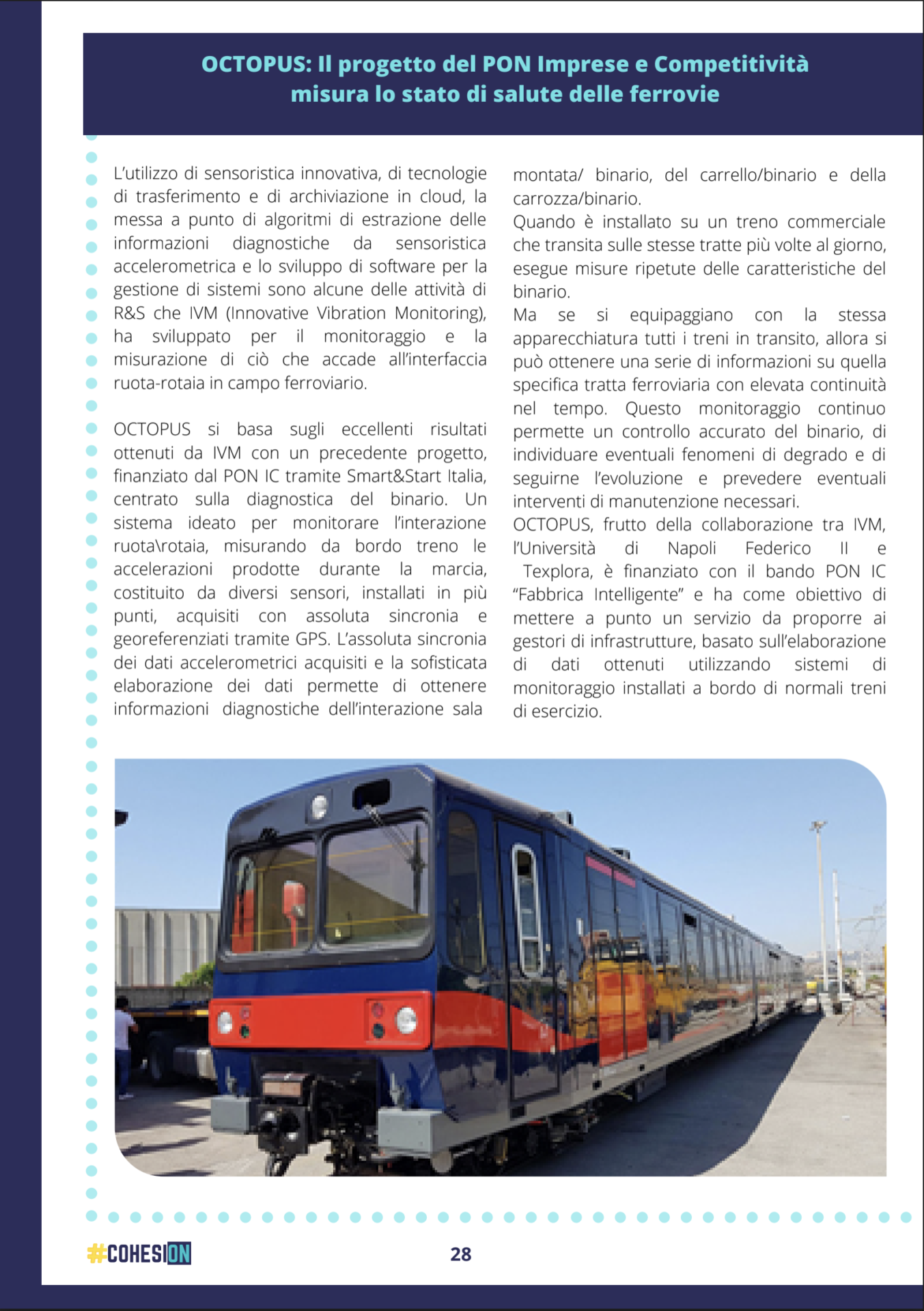 Some of the R&D activities that IVM (Innovative Vibration Monitoring) developed for the monitoring and measurement of what happens at the wheel-rail interface in the railway field are the use of innovative sensors, cloud transfer and storage technologies, the development of algorithms to extract diagnostic information from accelerometric sensors and the software development for systems management.

OCTOPUS is based on the excellent results obtained by IVM with a previous project, funded by the PON IC through Smart & Start Italy, centered on track diagnostics. It is a system designed to monitor wheel / rail interaction. It measures accelerations on board produced by a train while running and it is made of several sensors, installed in several points, acquired with absolute synchrony and georeferenced via GPS. The absolute synchrony of the acquired accelerometric data and the sophisticated data processing allows to obtain diagnostic information of the wheelset/ track, bogie / track and railcar/ track interaction. When OCTOPUS is installed on a train that travels on the same routes several times a day, it performs repeated measurements of the track characteristics.

But if all the trains in transit are equipped with the same system, then a series of information can be obtained on that specific railway section with high continuity over time. This continuous monitoring allows an accurate control of the track, to identify any degradation phenomena and to follow their evolution and foresee any necessary maintenance interventions.

OCTOPUS is the result of the collaboration between IVM, the University of Naples Federico II and Texplora and is funded by the PON IC “Fabrica Intelligente” that aims to develop a service to be provided to infrastructure managers, based on the processing of data obtained with monitoring systems installed on board of trains that travels on the same routes several times a day. 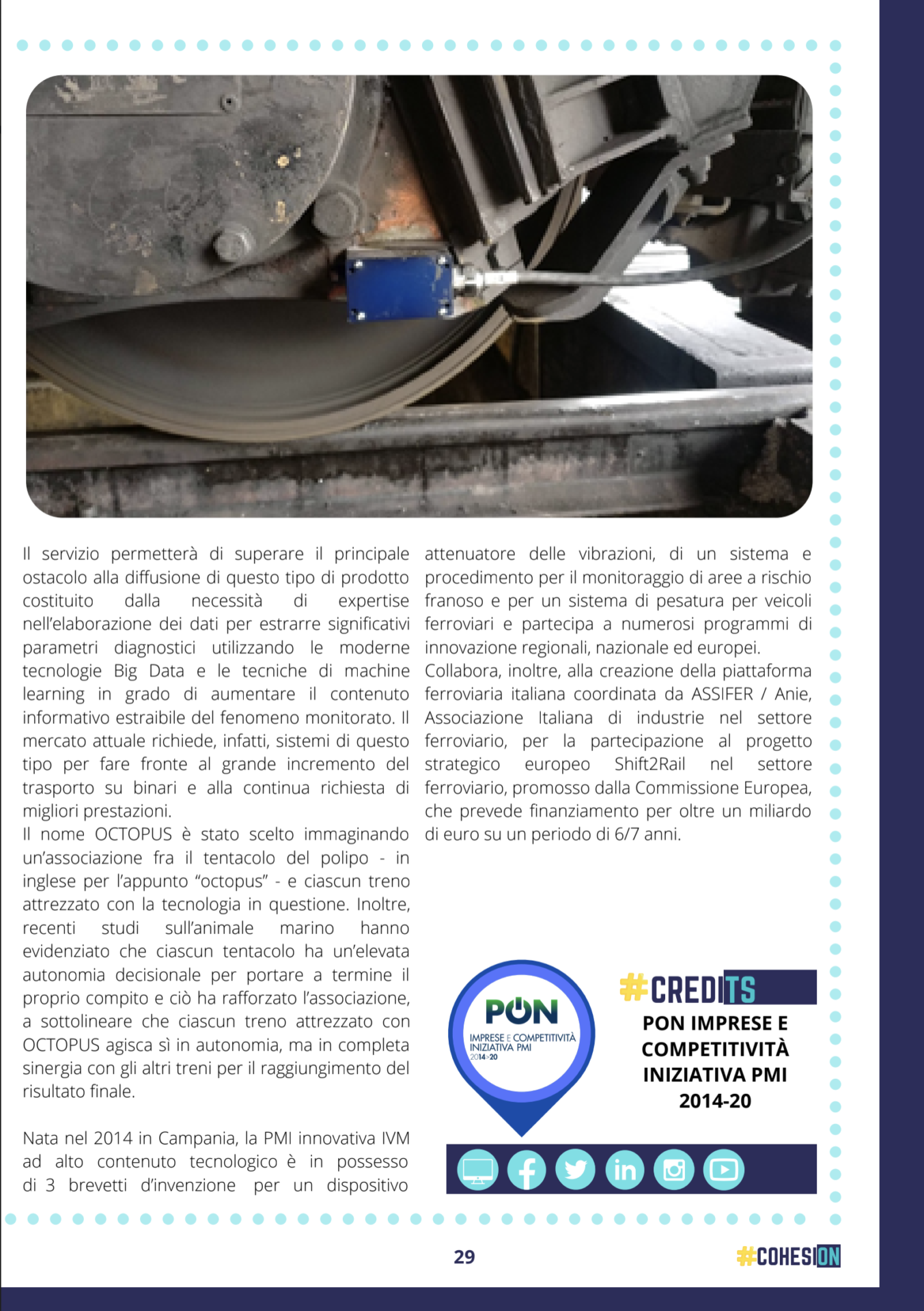 This service will allow to overcome the main obstacle to the diffusion of this type of product consisting of the need for expertise in data processing to extract significant diagnostic parameters. It will use modern Big Data technologies and machine learning techniques capable of increasing the content of the monitored phenomenon. The current market requires, in fact, this kind of systems to cope with the great increase in rail transport and the continuous demand for better performance.

The name OCTOPUS was chosen by imagining an association between the octopus tentacle and each train equipped with this technology. Furthermore, recent studies on the marine animal have shown that each tentacle has a high decisional autonomy to carry out its task, underlining that each train equipped with OCTOPUS acts independently, but in complete synergy with other trains to achieve the final result.

The innovative and technological SME IVM was founded in 2014 in Campania and holds 3 invention patents for a vibration attenuation monitoring system, early warning-landslide monitoring system and a weighing system for railway vehicles. It participates in numerous local, national and European innovation programs. It also collaborates with ASSIFER / Anie (the Italian railway industries association) to create the Italian railway platform for partecipation in the European strategic railway project Shift2Rail, promoted by the European Commission, which provides funding for over one billion euros in 6/7 years.